After getting positive feedback on my potty post, I thought I would continue my series of awkward britishness abroad and bring you the second of the series…..
***

So I found a definition of precipitants on the Met Office website and now am slightly alarmed:

The definition of precipitation is any form of water – liquid or solid – falling from the sky. It includes rain, sleet, snow, hail and drizzle plus a few less common occurrences such as ice pellets, diamond dust and freezing rain.

The average annual rainfall is apparently around 133 days for the whole of the UK which amounts to around 36% of days are rainy. But this indeed varies from area to area, for instance Wales sees 167 days∧ (45%) of rain, and that is when the sea doesn’t want to be part of our world.

I can safely say I know rain, hail, sleet and snow as the staple precipitants. And sea water if you want to talk about coastal living, but again that is a different kettle of fish. So why do I find Canadian precipitants weird? Well. Buckle up because I just experienced my first Canadian Winter. And survived. (edit: I apparently it’s not over yet…)

The most magical of precipitants. We all know the drill in the UK that a small white dot falls from the sky masquerading as snow and the whole country gets its knickers in a twist and literally shuts down. Panic Stations everyone, its started again. Bring on more snow and it’s just a mess. There are bread shortages and crisis after crisis, people put milk in their tea before the water; generally not a good thing.
As a younger human I did enjoy the idea of snow and doing the snow things as school would be cancelled, like tobogganing and snowball fights. A snow day was a magical thing that came out of the blue. Well the grey.

BUT snow is not the same in Canada and people just carry on with their lives as they muscle their way through 20 ft of snow on the sidewalk as they need their Timmy’s as its roll up the rim season. I should also mention that when it snows here in Ottawa, it is not bad as other places in Canada.

My issue with snow is that it is deceiving and tricky. After settling being all nice and fresh and dusty the temperature will drop, freeze your eyelashes together and turn the snow into a nightmarish hell. It looks so innocent, being all untouched and bright but do not be deceived by its siren like appearance as that sh*t hurts when you do the slip and land in it. AND the snowbanks. Yes the Canada is efficient at clearing the roads and sorting out the sidewalks and doing the grit thing but it mounts up to a wall between cars and people. Crossing the road doesn’t get tougher than this. 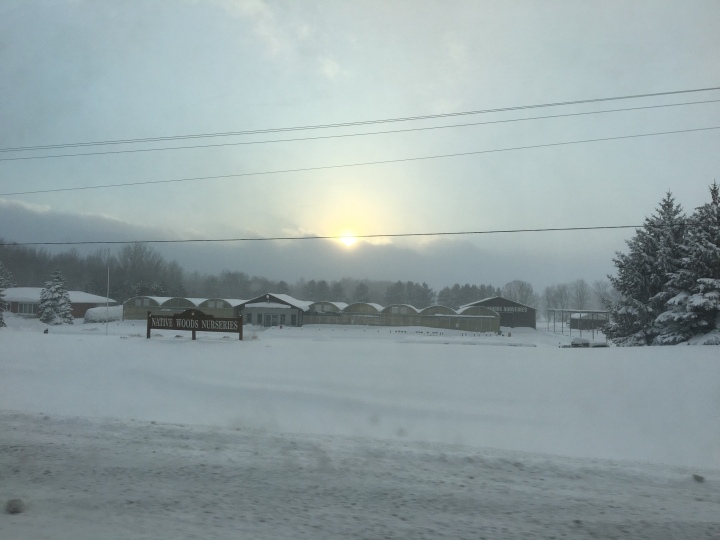 Then there’s the snow removal. Just overnight teams just clear up the snow into big trucks and it disappears. Where does it go? Is it recycled as icebergs? Do they sacrifice it for a milder winter? I am sure there is a rational explanation that I am not asking the right people for…

One last thing about snow. When it goes to the blue sky sunny days the snow blinds you. If you don’t have sunglasses you might as well be staring into the abyss of hell as it freezes over.

I was warned about freezing rain and I merely laughed it off. My relationship with rain and complaining about the rain made me believe I could handle anything rainlike coming out the sky. Until I got caught in freezing rain. At first it was just like rain, refreshing, wet and very much rainlike. And then it changed. It disguises itself as normal raindrops until it lands. Then it reveals its true icy form as it changes roads and paths into skating rinks and physically freezes your clothes in place.

The best way to describe freezing rain to people who have never had the horror of experiencing it, would be to say it’s backwards hail. Hail comes down as ice and melts when it hits the ground. It does sting a bit but it just leaves places damp. Freezing rain is the opposite. It comes down damp and freezes everything it touches.

What is the best bit about freezing rain? It ruins lives. That may seem a dramatic response, but it does form icicles in a blink of an eye weighing down trees and plants and powerlines. Something that can be potentially dangerous. And it doesn’t runoff like water. Once it hits the ground, it sits there. And as its ice and not snow, plowing does little to tame the behaviour of it.

I thought I had a good understanding and relationship with rain, but now I doubt going outside when the heavens have opened. What if it’s that fake rain malarky again?

***
I could quite happily talk about the weather for another 1000 words. Maybe I should have gone in meteorology…
Until next time friends, make sure you make the most of the sunshine!

One thought on “Normal Canadian Things I Find Weird #2”

📌 Agon-Coutainville
I love this time of year. It's not quite summer yet and everything is covered in flowers ♥️
Another sunny day 🌄