I lived there for over two years and didn’t write a post… But now that I’ve left the capital of Canada, I guess I’ll write the best bits…
***

I grew up next to fields and woods, dirt paths weaving in and out of copses, up and down hills… Somewhere pretty stereotypically English in terms of rolling hills surrounding winding roads and sprawling towns. There is no logic to the twisting turning veins of streets and lanes that connect villages and towns together. Moving to quite the opposite of that is, of course, the straight roads and grids of North America. Ottawa is no exception, to the straightness of streets and roads.

I arrived in Ottawa in September 2017 ready to take on the capital and what it had to offer. I’m not going to lie here, but I did manage to do most of the sights and attractions within a week, but that’s not what this post is to reminisce about. That’s what Narcity is for, so if you’re looking for a top ten of things to do in Ottawa… this post is not it! September is the in-between month for Summer and Autumn, not being too hot and not being cataclysmically chilly, with a smattering of gold, red and orange on the trees for good measure. Overlooking the Rideau river you are faced with a gorgeous fall backdrop from the rolling Gatineau hills, only adding to the splendor that September offers.
Now, I would go on and write an essay about my time here in Ottawa, but there is too much to tell, and too many good memories that could potentially make me cry just a little due to my departure, so let’s keep it together and give you a rundown of the things Ottawa has to offer.

1. Food & Beveraging: The Most Important Point.

As with most places in North America, the city seems to be functioning on chain based coffee houses, the most notorious being Starbucks, followed swiftly by Tim Hortons, Second Cup, and Ottawa based Bridgehead.  Yet, in the midst of commercialisation, there are some utterly fantastic independent coffee places to suit the more “hip” young people. (Something I aspired to be, then realised that I am the opposite of.) These smaller cafés offer such vibrant choices of beverages, whether they are their own roasteries or just bizarre concoctions to the British eye… You can read more about coffee in Canada here. Surprisingly, restaurants are mainly independent and offering an international menu, meaning you can get whatever you are craving from Ethiopian to Vietnamese, Lebanese to good old Canadiana. (But if you are wanting a decent pie, prepare to be disappointed.)

Now if you’re looking for cocktails or drinks for a night out, Ottawa did not disappoint on that level. There is every kind of bar out there, yet be warned, some to most charge cover to enter the bar meaning that having cash in hand is imperative for a bar crawl. There are some eclectic bars dotted around the city, many not being in walking distance, but well worth the trip. But there is also the quiet bars which feel like home where I made friends with the staff including Mulligans on Queen street, which is a golf bar and Brigid’s Well under the church on St. Patrick’s street.
it is worth mentioning here about the liquor laws in Ontario, where alcohol is only allowed to be consumed in establishments between the hours of 11am and 1am Monday to Saturday and 12pm to 11pm on Sundays. Meaning nights out end normally around 1:30am, which is very early for a European like me. 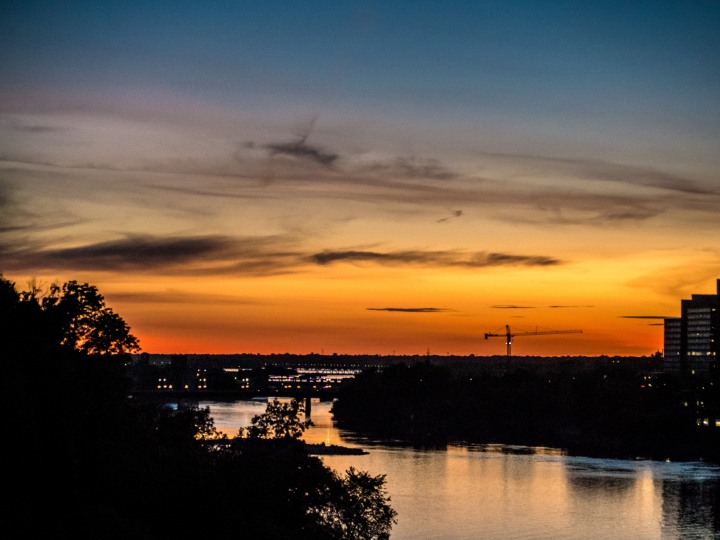 It’s your day off or your evening off and you actually have some rainy day fund to spend on having some fun that isn’t drinking. What do you do?
Unfortunately, Ottawa doesn’t really offer much in terms of entertainment that’s viably accessible by public transport. A lot of the bigger entertainment companies are based out in the suburbs where the nearest bus stop offers an irregular bus or a long long walk. Being a young person in the city, I definitely was not in the market to buy a vehicle so understandably relied on the glory of OCTranspo. Yet, within the downtown and market, there are copious numbers of escape rooms, (shout out to Escape Manor who put up with me for nearly 2 years) which offer an hour of fun and frustration. There are also places to play boardgames, video games, and virtual sports, all of which are a good time.

If that’s not your go-to, then there are the downtown museums, including the Nature Museum, National Art Gallery, Museum of Civilisation and the War Museum. There are other museums too but they really need a car to access them in a decent commute time. Thursday evenings in Ottawa see the museums open to the public for free between 5pm and 8pm, giving ample time to peruse the exhibits and of course the gift shop.

Do you like sports? A hockey fan you say? Well, I hope you like OHL teams as the 67’s are the closest hockey team to downtown that are worth watching. Unless you have vacation time or a day to kill to get out to Kanata where the Canadian Tire center is based, the home of the NHL team Ottawa Senators. I’m not bitter about this. I promise…

There are more activities around Ottawa such as karaoke, live music nights and fun themed bars, but they all encourage drinking as well as the activity, so not noteworthy pure entertainment.

When it works, it works. But that doesn’t happen often. OCTranspo, sort yourselves out, please.

4. Nature and Sports and Active things

Personally, I did not join any sports in Ottawa, but I know for a fact there is a wealth of sports teams you can join from soccer to Gaelic football, archery, to ultimate frisbee. I’m sure if you google your sport of choice, you will find something, but I am not a very active person currently…

Now Nature is something I can talk about more. Aforementioned Gatineau hills, home to the beautiful Gatineau Park, perfect for all-season activities, walking, hiking, camping, canoeing, skiing, snowboarding or whatever floats your goat. It’s literally right there. If you want to get up to some water-based fun, there are places to rent kayaks and such to paddle about the Rideau Canal and Dows Lake.

Winter changes things by quite a bit, the whole cold as heck weather freezes everything so if you like ice skating, Ottawa is home to the world’s longest ice rink, a.k.a. the Rideau Canal. You don’t need to own your own skates, even though you can pick up a pair for $10 at value village.

Another great spot just outside the city is La Mer Bleue bog. A prehistoric bog with over 25km of trails and boardwalks. Check it out here from my cheeky bog trip. There are so many little hidden gems of nature hidden around the capital that just needs a research to find.

The best bit about my Ottawa experience was the people I got to do all these activities with. There are some absolutely awesome people in Ottawa, you know who you are, who have made good times great and given me the opportunity to enjoy a small grey city in a multitude of colour and light. Thank you, friends. I miss you all.

Exciting news! New projects are ahead this year, as I am now registered as an interior designer, graphic designer and photographer ready for work in Normandy. Already have my first 3 projects to get stuck into including two bedrooms and a bathroom to revamp! I never thought people would let me paint their walls and choose their interiors but looks like that's a thing now? . . . . . . . . . . . . . . . . #interiordesigner #graphicdesigner #photographer #normandie #50140
Too many reasons to list why I love you 💜
Nyooom zooom Boss Dog loves a good beach run. This is back in November!